Home > Curating the Past: Repair and Conservation at Brodsworth Hall 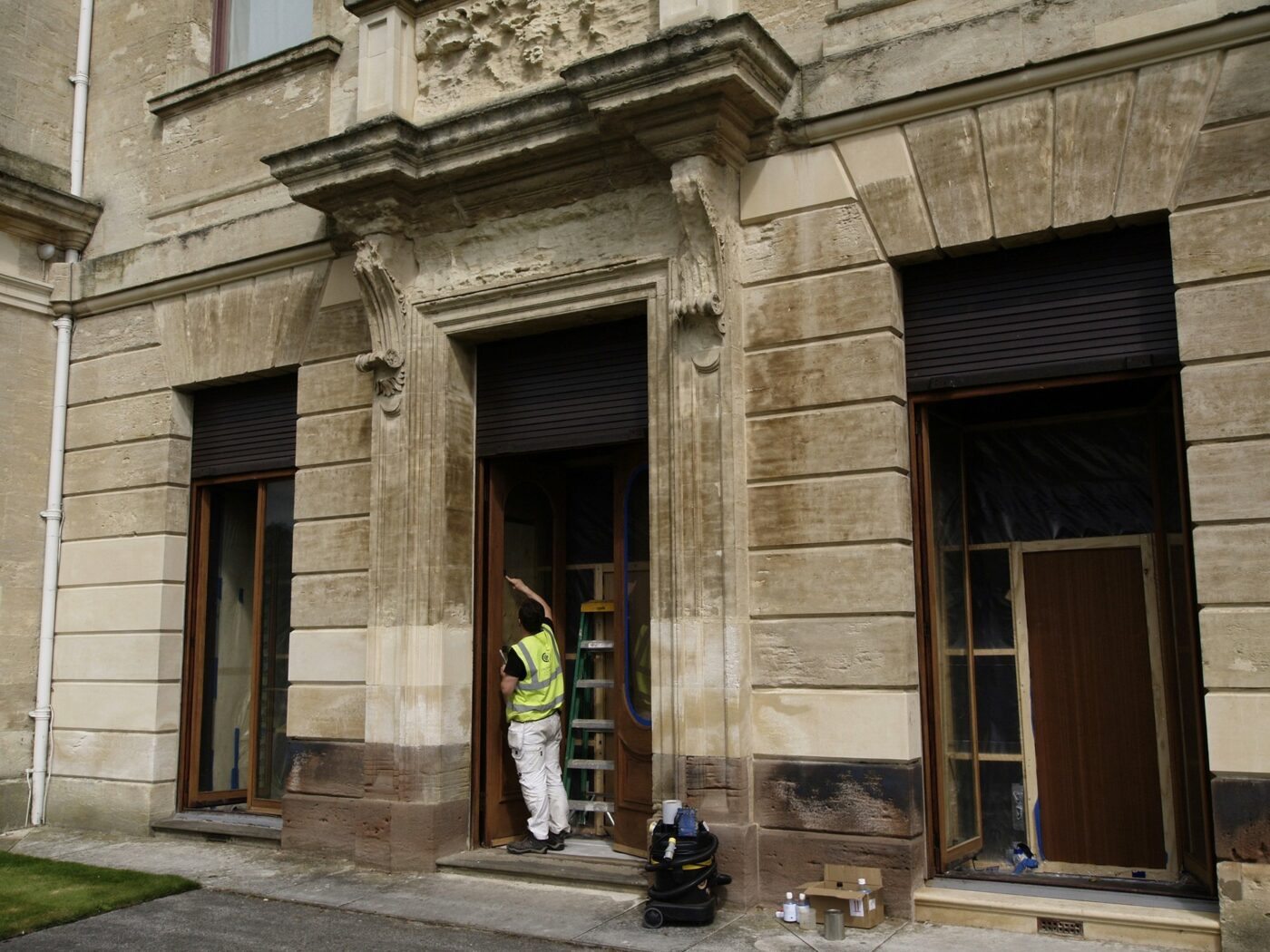 Brodsworth Hall in South Yorkshire flourished for just a very short period, but memories of its heyday and subsequent decline have proved persistent. The house was built in 1861-3 by Charles Sabine Thellusson, who in 1858 had inherited the estate from his great-grandfather. It was designed by a London architect, Philip Wilkinson, in an Italianate style. Brodsworth Hall was made for pleasure. The Thellussons spent the summer yachting on the south coast and the winter at home, hosting parties and game shooting.

By 1885, however, a slow decline had set in. Some much-needed income was provided from 1905 when a colliery was established on the estate, but this also caused the house to suffer from mining subsidence. After 1919, the house was only used by shooting parties during the winter. Over the course of the 20th century economic depression, military requisition and death duties took their toll.

Charles Grant-Dalton and his wife Sylvia, who lived at Brodsworth from 1931 to 1988 (Charles died in 1952), did what they could to slow the decay. Traces of their economising efforts can be seen in almost every room, in the reduced fireplace openings, the gaps on the walls where sold-off paintings once hung, the threadbare carpets, the curtains that have been cut and turned, and the Formica covering the kitchen tables.

The house was acquired by English Heritage in 1990. Its relatively late acquisition (the majority of country houses were sold in the mid-century period) and its long decline have resulted in the preservation of an extraordinary collection of country house ephemera. The building embodies the memories of its time as a family home to a far greater extent than many other country houses which are now open to the public.

Brodsworth Hall replaced an earlier Georgian house, which was in turn a rebuilding and refacing of an earlier manor. The new mansion benefited from a more private location on the estate, adjacent to the woodland to provide good shooting, and amid luxuriant gardens. This pattern of building is similar for Sutton Scarsdale Hall in Derbyshire, which Donald Insall Associates is also repairing for English Heritage. The key difference between the two houses, however, is that Sutton Scarsdale is a ruin, stripped of its interiors in 1919, whereas Brodsworth has been frozen in time, intact. This creates a different set of challenges for a conservation architect.

Our work at Brodsworth has focused on a set of patented timber roller shutters that were installed during the original construction of the 1860s. These provided security in front of the slender mahogany French doors and were necessary during the long summers when the house was unoccupied. Revolving shutter technology was developing rapidly in the 1860s. The shutters at Brodsworth Hall were a patented variant by Francis & Co.

The shutters were raised and lowered via a rope on a pulley, counterbalanced like a sash window with cast iron weights. However a number of defects have rendered many of them inoperable, despite continual repair and maintenance since their installation. Oral history records gathered by English Heritage reveals the shutters were difficult to use in the time of Sylvia Grant-Dalton. One member of staff, Les Trott, recalled the arduous task of lifting and lowering the twenty-three troublesome shutters on a regular basis.

In determining how to carry out the repair, there were several considerations: the importance of the original design, which was a particular example of one of the many variations developed during the evolution of the product; the significance of the defects in later memories of life in the house (it is often the quirks and curiosities which bring a place like Brodsworth to life); the necessity of working shutters to control light levels in the principal rooms, which contain the significant and vulnerable collections; the wellbeing of English Heritage staff whose job it is to operate the shutters today; and the need for careful construction works in a sensitive historic building which was to remain open to the public.

Our approach, working with a specialist contractor, has been to find the right balance between romance and pragmatism. We have repaired two of the shutters to the original patented design – in the Drawing Room and the Lathe Room – so that they endure as a living archival record. The repair strategy for the remaining shutters introduces a gearbox and winding handle to the mechanism, alongside slat joinery repairs and linseed oil paint decorations to reduce the need for ongoing maintenance. The decision to vary from the original design forms another later in the revolving shutter’s historical development. Trial works and continuous improvement through the construction phase have resulted in the specification of minute details, such as the finished orientation of each and every one of the 1,500 slotted screw heads per shutter to reduce the need for ongoing maintenance and make them easier to use.

Oral history has proved an important tool at Brodsworth Hall for understanding how the building has evolved, how it has been repaired and how its significance has changed over time. With a thorough understanding of its past and the stories behind its fabric and collections, Brodsworth Hall can continue in its latest phase of life as an English Heritage property, bringing a new layer of memories to this special place. Our work at Brodsworth Hall is scheduled to complete in Autumn 2017.