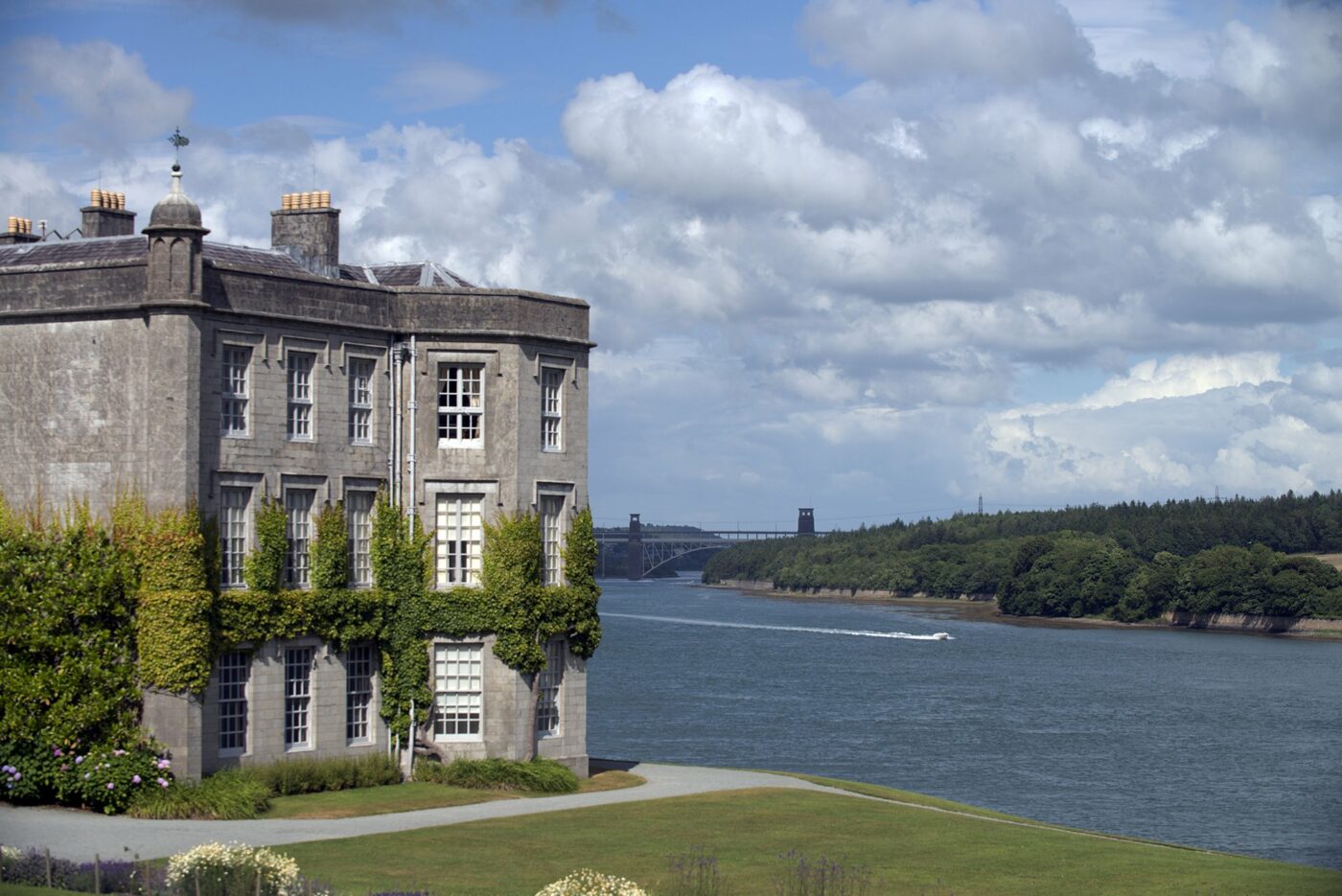 The story of Plas Newydd in Anglesey, Wales, charts a great swathe of British history from battles to brushstrokes, by way of unrequited love and tragic loss. The name Plas Newydd translates as ‘new mansion’, but the house is far from new. There has been a residence in this location on the banks of the Menai Straits since the early 16th century. There is a Neolithic cromlech (megaliths arranged in a circle) on the lawn to the west of the stables.

In December 2016, Donald Insall Associates, through a competitive tender, won the commission to lead a design team to upgrade the building services at Plas Newydd for the National Trust. Our role has been to manage the careful integration of new heating and lighting systems and to improve security and fire detection, whilst preserving the architectural and historic value of the site. The National Trust’s mission is ‘For ever, for everyone’ and this reflects its aim to conserve its portfolio while at the same time securing and widening public access to historic places, landscapes and monuments.

Gothick with a ‘k’

The building is listed at Grade I and the account given by Cadw neatly sums up the principal areas of significance:

Listed grade I as an important example of an 18th-century country house, notable for the early use of Gothick in the re-modelling and extension of an earlier building in the 1750s, but especially for the coherent re-modelling of the house by Wyatt and Potter, combining neo-classical symmetry with gothic detail, and including interior work of exceptional quality. The 20th-century work to the house is also of consistent character, and the Rex Whistler work is particularly notable.

Plas Newydd was one of the earliest examples in North Wales of re-modelling in the style of ‘Gothick with a K’, as it is known by architectural historians. This shorthand is used to describe the late-18th-century practice of adding medievalising crockets, spires and tracery to otherwise classical buildings in order to create an impression of antiquity. Later much despised by true goths such as AW Pugin and William Burges, who sought the spirit of the Middle Ages as well as the detailing, the Gothick was a fundamental part of the picturesque movement and can be enjoyed today for its light-heartedness and creativity.

Plas Newydd was given a thorough and wide-ranging re-modelling by James Wyatt and Joseph Potter in two phases, 1783-6 and 1793-9. This was a less assertive style of gothick than many such later adaptations and resembled the ‘polite’ gothick of Talacre Hall, the home of the Catholic branch of the Mostyn family, rather than the full-blown castellated towers and battlements of Gwrych Castle, Abergele, another Insall Conwy office project. The comparatively early date of the Plas Newydd re-modelling was influential on north Wales’s country house architectural tastes during the 19th century.

Plas Newydd’s importance is not only rooted in its 18th-century history, however, but also in the 20th century and its connection to the artist Rex Whistler. In 1905, Plas Newydd became the main residence of the 6th Marquis of Anglesey. He embarked on a series of improvements to the house and gardens, including replacing the heating system and installing additional bathrooms to the principal bedrooms, making the house more comfortable for guests at the many parties hosted by the family. The noted architect H. S. Goodhart-Rendel was involved in larger-scale alterations in 1935-6. At the same time, Rex Whistler embellished the principal rooms with trompe-l’oeil paintings including – in the dining room – his largest piece, an imagined harbour scene with a backdrop of Italian churches, ancient ruins and the vast Snowdonian mountains.

The line between patronage and friendship became blurred during Whistler’s time at Plas Newydd. Whistler was devoted to the 6th Marquis’s’ eldest daughter, Lady Caroline Paget, and painted numerous portraits of her, including a nude. Many of the fantastical romantic landscapes Whistler painted include illusionistic tricks and private family jokes. This deepens the significance of the Whistler paintings beyond that of mere works of art and makes them a fundamental part of the house and its history. They are also his memorial: Rex Whistler was killed on his first day of active service with the Welsh Guards in Normandy in 1944.

Plas Newydd was bequeathed to the National Trust in 1976, with the family maintaining a residence on the upper floor of the house. This change from domestic use, and the associated reduction in staff, fundamentally altered the way in which the building performed environmentally. Although an early adopter of domestic heating and hot water, Plas Newydd was still reliant on numerous open fires, and the ventilation the flues provided was beneficial. Yet this came at a high price: until recently, Plas Newydd was the Trust’s highest single consumer of oil, at 128,000 litres a year. Since 2014, however, the house has been heated and mainly lit thanks to a 300kW marine heat pump and 50kW photovoltaic array.

Donald Insall Associates’ brief has been to introduce sophisticated ‘conservation heating’ throughout the property, flexible enough to cope with the unique mix of building uses present on site. These include accommodation for the donor family and Trust custodians, offices, conservation stores and, finally, the particular needs of the fine rooms including the celebrated Whistler paintings.

The Spirit of Place

In order to achieve this sympathetically, we have undertaken a broad-ranging statement of significance for the property. The National Trust’s preferred tool for understanding its historic places is the ‘Spirit of Place’ statement. This is derived from the ICOMOS Declaration of Quebec and is defined as ‘…the tangible… and the intangible elements…, that is to say the physical and the spiritual elements that give meaning, value, emotion and mystery to place’. The declaration goes on to argue that the ‘spirit’ and the ‘place’ interact and together define the cultural significance of a heritage site. This approach seems particularly appropriate to the multi-faceted importance of Plas Newydd.

The power of history at Plas Newydd is astonishing in places, but it could easily be undermined by modern interventions. Our goal is to provide 21st-century environmental controls and the highest level of fire detection and security with no discernible trace of our work. We have undertaken a full options appraisal and have developed a number of strategies in order to minimise the impact on the historic fabric, cater for the site’s myriad uses and to ensure public engagement whilst the works are on site. This last point is particularly important as the work presents an opportunity to add a new layer to visitors’ understanding of the house, providing a focus on the ‘behind the scenes’ work that the Trust undertakes in conserving its collection. Building new connections between people and place is the surest way of securing the conservation of Plas Newydd for the future. 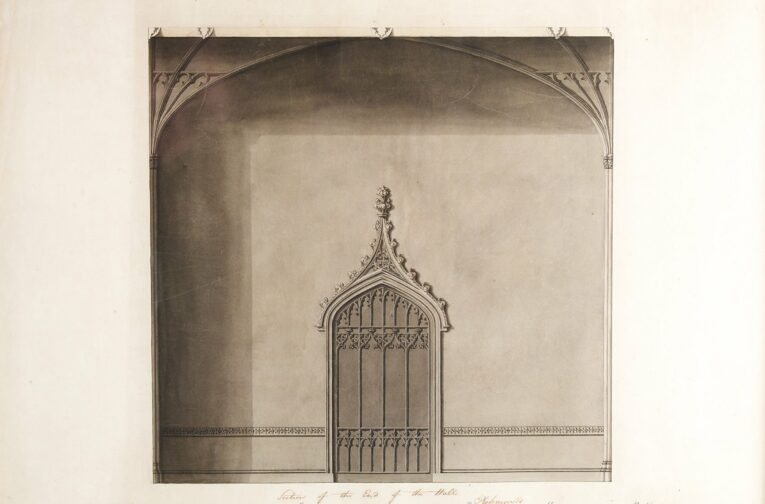