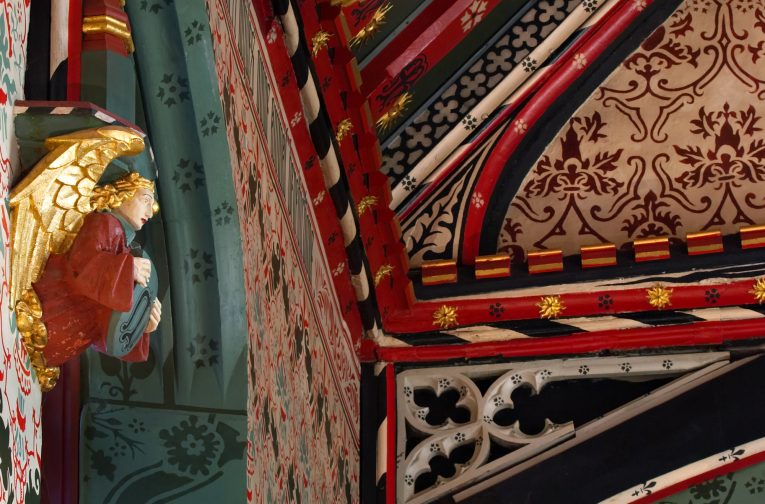 The Old Hall at Queens’ College has been extensively worked and reworked, throughout most of its 600 year life. Its current incarnation displays 19th century decoration within a 15th century interior, which had been altered in both the 18th and 19th century. Donald Insall Associates led extensive works to refresh the 19th century decorative scheme.

Part of the challenge at Queens’ College was to unpack and reveal the layers of change found in the historic fabric: The underside of the medieval roof of the hall had been concealed in the 18th century, and was subsequently re-exposed in the 19th century;  the decorative scheme was built up over time, including 18th century panelling and  the addition in the 19th century of an extravagant chimney piece, stained glass, a richly detailed encaustic tile and stone floor and an elaborate polychrome scheme for the walls and underside of the pitched roof.

By 2003 the encaustic tile and stone floor was severely worn and the condition and appearance of the decorative scheme, which had been over-painted in 1961, had deteriorated sufficiently to require attention again. The restoration was carried out in two phases: The floor first, followed by the fireplace tiles, wall and ceiling decorations. The best salvaged tiles were re-laid around the perimeter and elsewhere newly made encaustic and Purbeck Stone tiles were laid to replicate the original design. All were bedded on lime mortar incorporating underfloor heating. This reinstated the visual balance between the floor, walls and roof.

For the second phase of the work, a conservation strategy was devised to clean off nicotine and other dirt stains, to stabilise and restore the painted decorations. This involved selective removal of the 20th century overpaint to reveal the 19th century scheme; retouching of losses, varnishing of painted surfaces and the cleaning and re-touching of the ceramic tiles.

Renewal of the floor and conservation of the decorative scheme has successfully restored the balance of the original design. It shows, surprisingly, that it is possible to mix many strong patterns, using a variety of bold colours, to create a harmonious effect which is one of the most striking college interiors in Cambridge. 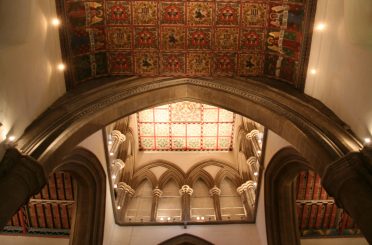 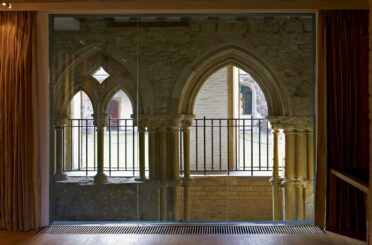 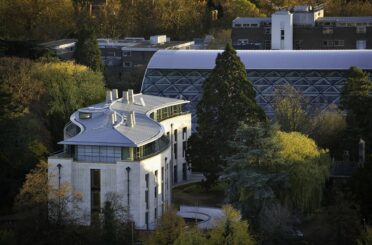