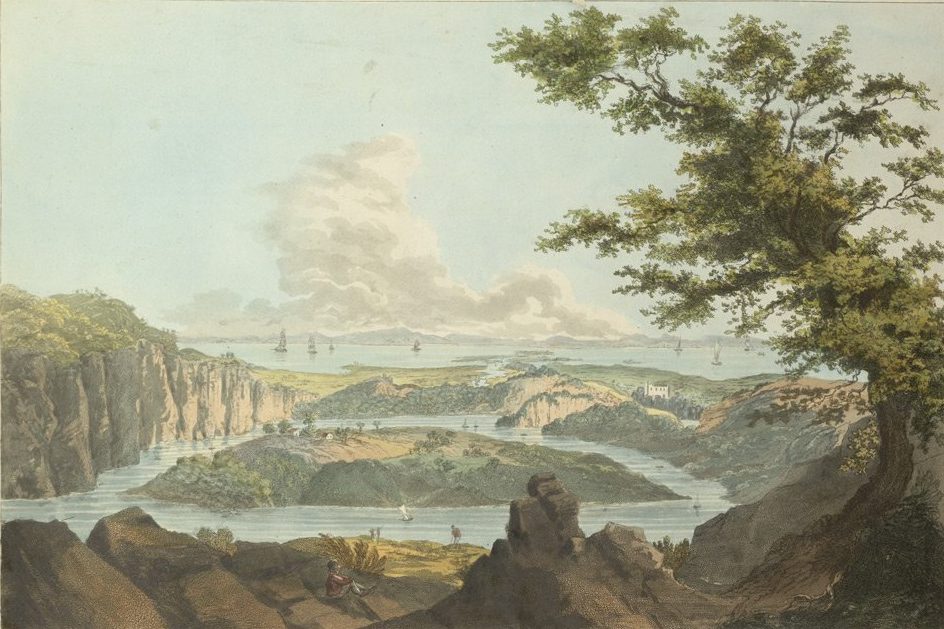 Victoria Perry looks at the wider socio-economic impact of plantation slavery and the slave trade on tourism in Georgian Britain.

The rope-bound statue of the slave trader Edward Colston as it was hauled out of Bristol docks was one of the most memorable images of this year’s Black Lives Matter protests. It was a poignant reminder of Britain’s role, alongside America, in trans-Atlantic plantation slavery.

Since 2007, the 200th anniversary of the abolition of the slave trade in the British Empire, museums and heritage organisations such as the National Trust and Historic England have been examining how profits from slavery funded buildings and collections in their care. But the historic influence of that predatory economy runs far deeper. Perhaps surprisingly, it impacted in particular on many of the country’s landscapes now protected as National Parks and Areas of Outstanding Natural Beauty.

Over fifteen years ago now, I embarked on a part-time Ph.D. to look at the links between Caribbean plantation slavery and the British landscape. My curiosity had first been piqued, as an architecture student, by discovering that an eighteenth-century shell grotto I helped repair had been decorated with Jamaican seashells. However, it was delving into the origins of an eighteenth-century landscape garden at a country estate – Piercefield Park near Chepstow, downstream from where I grew up in the Wye Valley – that drew me to write up my thesis at the Bartlett School at UCL, where I first studied.

Though Grade I listed, as an ‘early and outstanding landscaping of a sublime landscape’, Piercefield is little known today. But from the early 1750s, hundreds – if not thousands – of visitors from the fashionable resorts of Bath, Bristol Hotwells and further afield made ferry trips across the treacherous Severn estuary to take in twenty-three carefully framed views from the estate’s wooded cliffside walks.

The ‘scenes’ were recorded by renowned artists, like JMW Turner and Thomas Hearne, and a host of amateur sketchers. The emotions occasioned were celebrated in William Gilpin’s influential tour guide Observations on the Picturesque, and many a private journal. And they prompted one of William Wordsworth’s best-known poems, too: ‘Lines composed a few miles above Tintern Abbey’. Woods that once fueled local ironworks with charcoal were, at once, transformed into a gallery of landscape art. 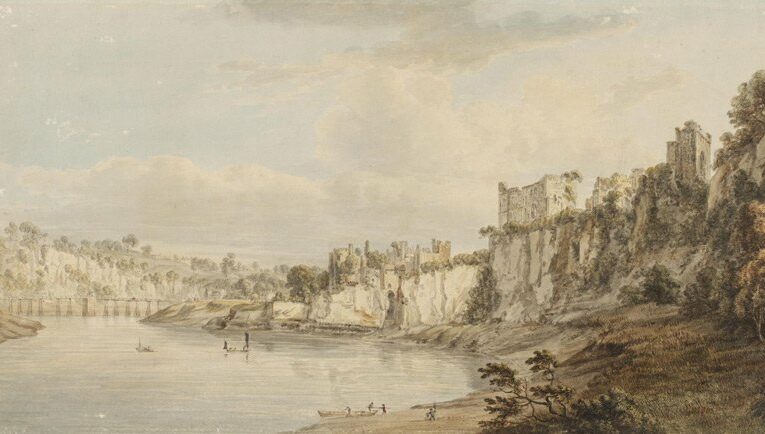 Chepstow Castle, Paul Sandby, 1775 (© The V&A). Chepstow Castle was just downstream of Piercefield and could be viewed from the walks. On Sandby’s tour of South Wales he was joined by the botanist Joseph Banks, among others. Banks was understood to have visited Piercefield several times and met with its owner, Valentine Morris

Piercefield’s cliffside walks were an influential example embodying the ideals of the ‘sublime and picturesque’: the British fashion of observing the natural environment as if it were a stage-set or painting, appreciating the ‘drama’ of a view. This movement was so prevalent during the late eighteenth and nineteenth centuries – influencing the growth of tourism in the Wye Valley, the Lake District, and the Welsh and Scottish uplands, alongside the design of landscapes, buildings, resorts and railway infrastructure, too – that it has been labelled the ‘nation’s principal contribution to the arts’ (David Watkin, The English Vision). And the concept, of course, is the origin of the term ‘natural scenery.’ 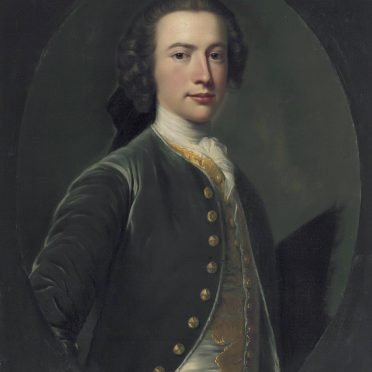 But the cliffs and woods that Wordsworth et al associated so closely with emotional freedom, and liberty itself, were also intimately entwined with human bondage. The creator of those woodland walks, Valentine Morris, was the Antiguan-born heir not only to Piercefield, but several sugar plantations on his island home, ‘stocked’ with hundreds of enslaved Africans.

So what prompted an absentee sugar-planter to create the ornamental parkland that so captivated Britain’s eighteenth-century cultural elite? Why had so many leading fashionable figures paid a visit? Why, indeed, was Piercefield so celebrated in the latter half of the eighteenth century, but is so little known in the twenty-first? I suspected that Morris was not the only Wye Valley landowner with historic links to sugar and slavery. And was he, I wondered, representative of a wider cultural influence in Britain of the time?

The archive records of the Piercefield estate were, sadly, sparse; there were no diaries, drawings or sketches to explain Morris’s ambitions. An initial database search, however, of British country estates with holdings that also included Caribbean sugar plantations yielded more than sixty entries. With the knowledge that there was a lot more relevant source material, I embarked on my study.

My research took me from the ‘Black History’ section of my local library in Hackney, East London, to archive visits to coastal towns in Lancashire and North Wales. I visited country houses and landscape gardens throughout Britain, beaches on the coast of West Africa, and former slave markets and ruined plantations in the Caribbean. As I witnessed, and read more, patterns emerged.

Morris’s Caribbean background was far from unique in eighteenth-century Britain. Many plantation owners and sugar merchants invested back in British estates, or married offspring into landed families to give their wealth security and to join the country’s elite. Like Morris, they funded agricultural improvements to increase yields, created ornamental landscapes, and extended houses to their taste.

While plantation profits were invested throughout Britain, especially around London, there was a noticeable concentration of estates near western ports with a growing Atlantic trade in sugar and tobacco: Bristol, Liverpool, Lancaster, Whitehaven and Glasgow as well as smaller western coastal settlements. Many plantation owners and merchants, it seemed, wanted a base not too far from the seaports where news from the colonies could be swiftly gained. Moreover, like Morris, they were also major investors in – and private promoters of – brand new, well-built roads nearby, be they extensive private drives or public toll-roads, the ‘turnpikes’.

As I researched, I saw that that there was a link between colonial plantation wealth and the opening up of landscapes in hitherto remote parts of western Britain. The mountains of North Wales appeared, after all, not so unreachable when viewed from a Liverpool-bound ship, sailing from Jamaica; the Highlands were not so distant from Greenock, Glasgow and other Clyde estuary landings; and the lakes and hills of Cumberland were but an hour or so from Whitehaven. Indeed, as I delved further, it became clearer that the late eighteenth-century British fashion for ‘landscape touring’ on the Wye, in Snowdonia, the Lakes or the Highlands was intimately connected with the growth of the triangular Atlantic trade.

Generally, touring’s development has been depicted as a reaction to changing circumstances: difficulties in embarking on the privileged Grand Tour to Europe, and – at the opposite end from ‘high society’ – the need for escape from growing urbanization and industrialisation. But, as I read through published accounts, it became apparent that early tour journals, such as those written by Daniel Defoe, had little to say about the beauty of upland landscapes. For Defoe, indeed, writing in the early decades of the eighteenth century, the poverty-stricken hills of Cumberland were ‘neither fit for man nor beast.’ 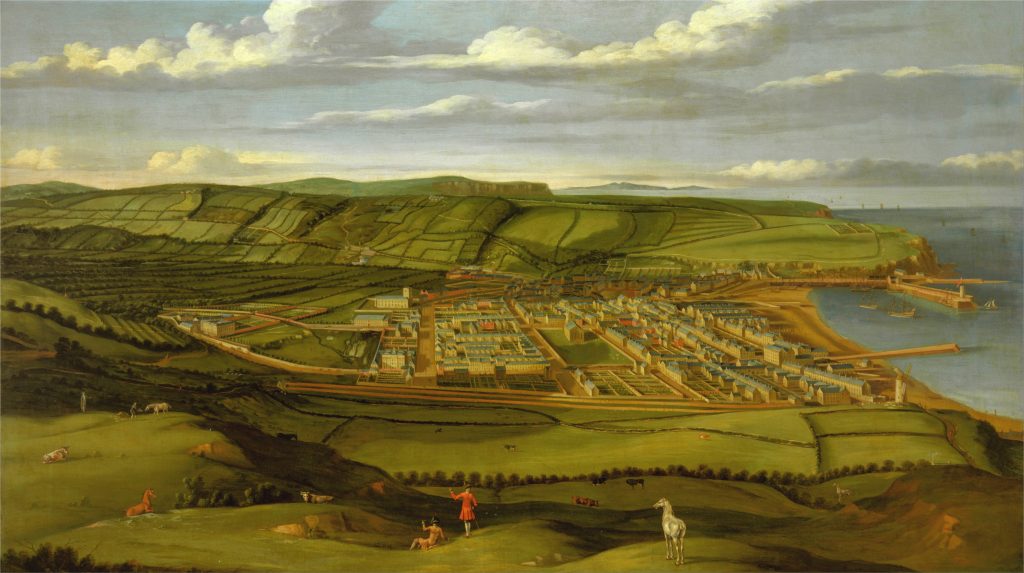 Over the next half century, of course, attitudes to ‘uncultivated nature’ were totally transformed and the Lakes became a popular visitor destination. However, it became clear that it was not tourists who first drew attention to the aesthetic qualities of these landscapes, but increasingly prosperous residents and their wider families. Whitehaven’s merchant planters were, after all, not trying to eke a living from upland hill farming in northwestern Britain; they were dealing in expensive luxury products grown on farms thousands of miles away. For young William Gilpin, indeed, scion of a prominent family of sugar planters and Whitehaven tobacco merchants, the lakes and hills were to be celebrated as part of everyday life. Gilpin, moreover, was not the only prominent writer about landscape aesthetics with connections with the Atlantic trade: the brother of Edmund Burke was a Caribbean land speculator and customs collector in the island of Granada whilst Wordsworth’s uncle held a similar official role in Whitehaven. Wealth and geography – coupled with social aspiration to lead a ‘gentleman’s’ life – allowed the remote hills of the upland west of Britain to be ‘re-imagined’ as landscape art.

While the Atlantic merchants and absentee planters of Whitehaven, Lancaster, Greenock or Glasgow could enjoy magnificent views with relative ease, for other Britons to experience ‘sublime’ landscapes they had had to be able to get there first.

Mid eighteenth-century Britain experienced, of course, a boom in road construction. Some of these new roads were state funded, particularly in Scotland where military issues were of particular importance. Most, however, were built for commercial purposes, to allow efficient access for manufactured goods to markets. These were privately funded through investment consortia – and a well-used turnpike could make a good return of 4% per annum.

The construction of toll roads, however, not only needed finance but also required an Act of Parliament. In the upland west, those with both capital and contacts were predominantly merchants involved in the Atlantic trade. And good new roads designed for large wagons to transport sugar and tobacco inland, and manufactures like tools and ceramics to port, were comfortable for coach travel, too.

Morris’s improvements to the rutted cart-tracks around Chepstow had allowed visitors from Bath and Bristol to make their trips to Piercefield and the Wye Valley in relative comfort and decorum. Most late eighteenth- and early nineteenth-century landscape tourists indeed, were not the hardy travellers of earlier years: they instead journeyed on well-built thoroughfares, instigated, organised and part-funded by the tobacco traders and sugar merchants of the west coast. 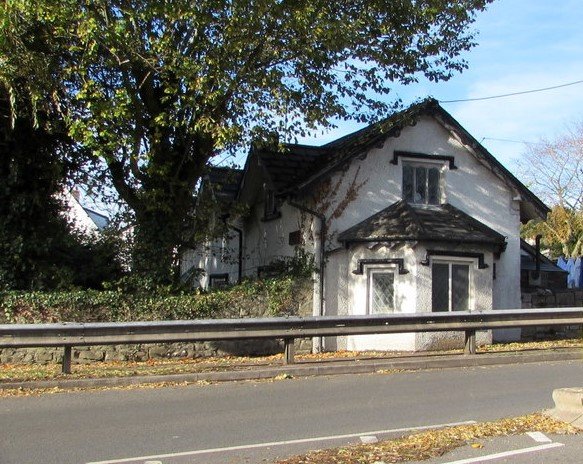 Turnpike Cottage, St Arvans. Built as part of the Chepstow
to Monmouth Turnpike which opened in full in 1829.
Valentine Morris embarked on the first section of
the road between 1754 and 1760 © Jaggery

It is now ten years since I completed my Ph.D.; my research sketched out patterns, but many details still need filling in. For it appears that the transformation of thought, ideals and reality was not just confined to Britain: it was the patronage of planters and traders that first brought the ‘natural scenery’ of the Caribbean and the independent United States of America to the wider public mind. Notions of the ‘sublime and picturesque’ were, it seems, an integral part of a visually sophisticated trans-Atlantic culture linking ‘goods, books and ideas’ – underpinned by the wealth derived from plantation cash-crops.

Returning to Britain today, is it still possible to enjoy the beauty of the Wye Valley, the Lakes, Snowdonia and the Highlands, whilst acknowledging their economic and cultural links to slavery? A resounding ‘yes’, I would say. Moreover, I would add that only by uncovering such long-obscured global connections, can we really understand the nuances of British – and indeed American – cultural attitudes to landscape.

In the wake of Black Lives Matter, and Colston’s ducking, it is only right that the custodians of our bitter-sweet heritage redouble their efforts to enhance public understanding. Perhaps memorials to the enslaved men women, and children, whose labour underpinned the plantation economy, would help, and attract a new generation to view the ‘scenes’ that so enraptured Georgian visitors. 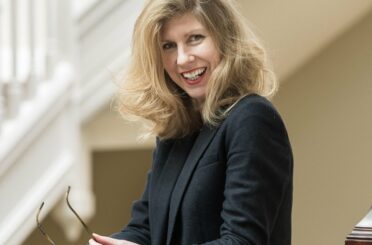 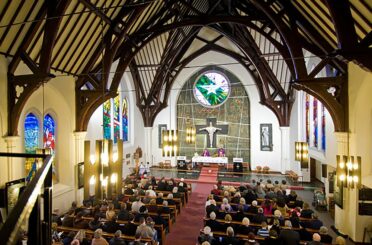