Home > The Re-establishment of an Industry 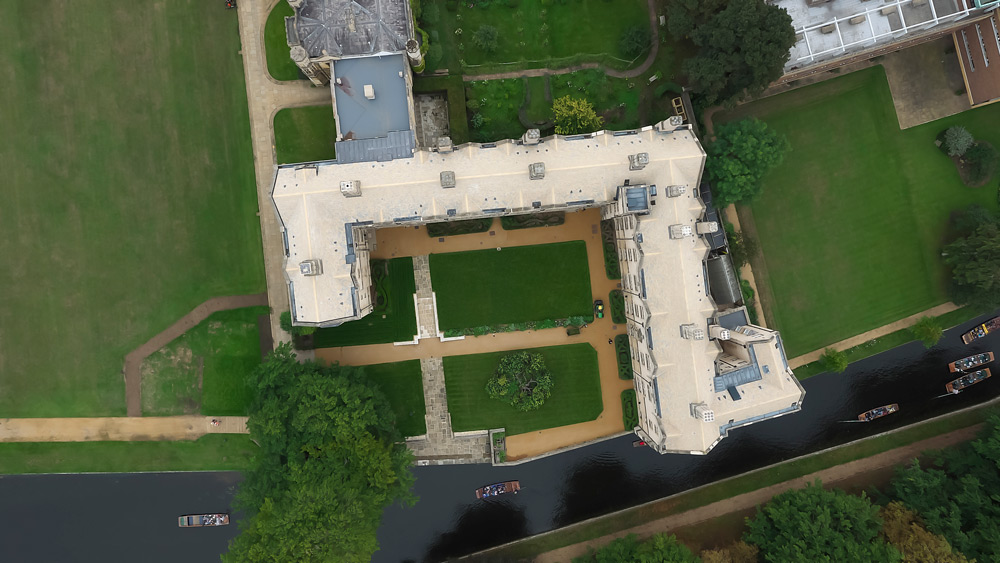 Donald Insall Associates has recently completed the re-roofing of Bodley’s Court for King’s College in Cambridge. Built in three phases between 1893 and 1955, the roof was of Collyweston stone slates which ceased production in the late 20th century. Together with King’s College, we worked with Claude N. Smith Ltd of Collyweston to re-open their mine and re-commence production of the stone.

When one talks of slate roofs the image that springs to mind is most likely the ubiquitous blue-grey slate roof which covers several million acres of suburbia. However, prior to the arrival of canals and then steam railways the word ‘slate’ would conjure up many more diverse images, particularly in rural areas and throughout Europe. Indeed, few who have travelled through the Alps or Pyrenees will not have noticed rustic buildings covered by huge stone slates of a metre or more in size. 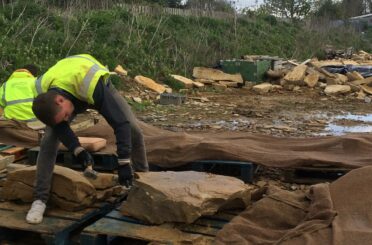 It will come as no surprise that traditional vernacular roofs are formed of the most suitable materials found most close to hand, be that straw, reed, clay tile or slate. So throughout Britain when talking in the past of slate it was very likely one was referring to a thin piece of sandstone or limestone, rather than the metamorphic stone of which we are so familiar.

For stone to be useful as a roofing material it must be readily divided into layers, and thus must be formed in a laminar or sedimentary way. To become fissile it must have a variation in character between beds when laid down which can allow it to be split into layers. A wide variety of stone is formed in this way, including limestone, sandstone, schists and other mudstones. The nature of its bedding, thickness of layers, flatness of layers their variation of character is dependent on both the circumstances of its deposition, whether it be in lakes, rivers, seas or through flooding or tidal movement, and the source of the material, be it marine organisms, glacial deposit or river gravels and silts. Clearly there is a huge variation in laminar stones and their properties.

The appearance of such stone slates followed the local geology, and where outcrops occurred near the surface which could be exploited easily, local traditions arose for their use and continued for many centuries. Where such sources of stone were not exhausted these traditions continued until very recently; thus the familiarity with many types, including Horsham stone slate, Cotswold slate, e.g. Stonesfield and Filkins, and Collyweston slates, which all hail from the settlements of the same names. Typically these stones are calcareous sandstones or sandy limestones, often occurring in thin beds intermixed with clay or sandy beds. It is the intermingling of these beds at their horizons that often gives rise to the very narrow laminations that suit the formation of slate.

The nature of their extraction and formation into slates varies and some, including Cotswold stone and Horsham stone, are quarried and split by hand. Others, like Filkins, sometime arise spontaneously as ‘presents’ being dug up as slabs from overburden, having naturally delaminated from the top of the stone bed as well as being quarried. Finally some are mined, such as Collyweston, which comes from gently shelving deposits near the surface and is unusual in that it is extracted as large ‘logs’ which are then wetted and left exposed to the action of frost to open their bedding planes before being ‘clived’ by hand.

The process of production of stone slates is not a precise art and there is a wide variation in the size of slates produced. Whilst thickness can generally be controlled and is related to the bedding planes inherent in the rock, length and width are variable and more dependent upon the process of extraction and stress fracturing of the stone. In order to maximise the economic use of the stone (rather than for any structural or constructional reasons), methods of laying slates have developed which utilise the wide variety of sizes available, and most stone slate roofs are laid in diminishing courses. There are of course exceptions where regular access to larger slates are possible; a record in the village of Filkins notes a hovel being roofed by a single slab. The aforementioned large slates found in the Alps are often more typically formed of metamorphic rock. In the UK, large units of Welsh slate are still available from quarries such as Penrhyn, with which we recently re-roofed the library at King’s College. 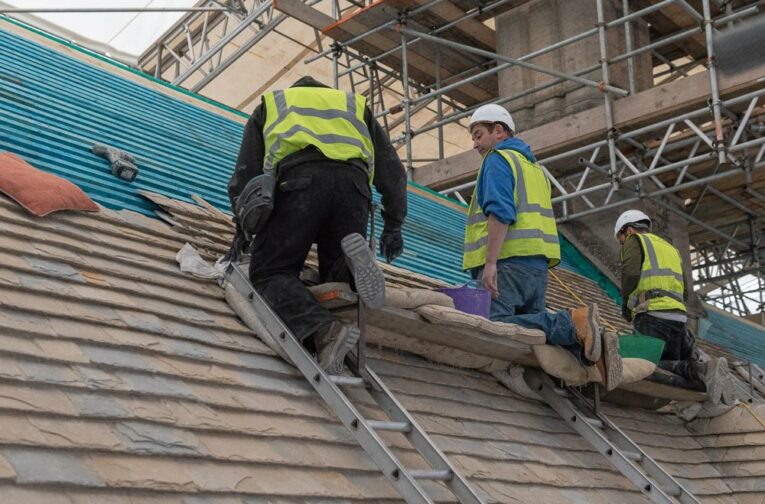 Laying and pointing up Colleyweston on the roof

There are also variations in methods of laying stone slate roofs, and most are laid dry except for the bedding of gutters and verges. Collyweston stone is unusual in this respect, in that it is laid in diminishing courses but is fully bedded in lime mortar (as also is Horsham stone). The slates are typically four, five or even six-sided, with two long parallel sides roughly perpendicular to the bottom edge. Fixed with a single nail, they have one or two sloping shoulders. These leave a gap between the slates and to the slate below which is galletted, i.e. filled with slate fragments and lime mortar. The next row of slates is then laid onto a roll of mortar at its bottom edges and sides and lies over the galleted infill. The gaps between slates are also infilled with lime mortar. The result is an exceptionally robust and weathertight roof. The slight disadvantage is that it is not very vapour-permeable, and a good degree of ventilation is best maintained within the roof space.

The Collyweston mining process was extraordinary and is worthy of some description. We have been fortunate to visit the mine of Claude N. Smith Ltd in Collyweston to witness the stone’s extraction and hear of how this was done traditionally. There is a thin bed of about a half to a metre in depth of suitable stone which exists about five or so metres below ground. This lies onto of a bed of soft sand of around one and a half metres thick. To extract the stone, the sand was scraped out from beneath the stone forming a ceiling, and regular props in the form of precarious piles of foot-square waste stones were stacked up being then wedged tight to the ceiling, a process known as ‘foxing’. When a sufficiently large section of ceiling was exposed so as not to be any longer self- supporting, ropes were placed around the piles of stone and the miners heaved on these, toppling the piles, thus removing support and causing the stone ceiling to collapse down onto the floor, breaking up as it went. Claude’s son Nigel assures us that in the past no one was ever killed in this exercise, but one has one’s doubts. Today a less reckless approach is used. 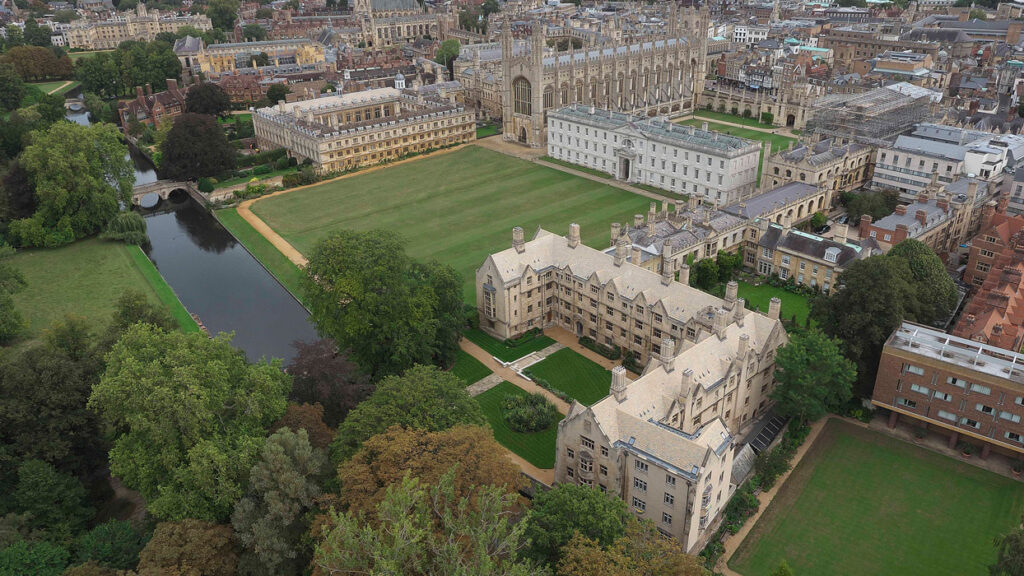 The finished roof at Bodley’s Court

The stone slate industry, although regional but widespread, rapidly declined throughout the latter half of the 20th century due to the availability of cheaper materials, artificial replacement, lack of availability and cost factors, and now is a rarity with few exceptions. At Collyweston the industry was said also to have halted due to an increasing lack of regular and reliable hard frosts brought about by climate change, and production at various Collyweston mines declined from around the 1970s up to the last in 1993.

Thereafter a few specialists such as Smith’s survived on the use of old stock and the reclamation of stone taken from buildings under demolition or being re-roofed with cheaper more available material. However, the stone remained available underground if a means to produce it reliably could be found, and the notion of artificial freezing was suggested and researched by English Heritage, the Burghley Estate and Sheffield Hallam University in the late 1990s. Then, near to Collyweston, trials were started in 2012 by Messenger Construction with assistance from English Heritage to produce ‘Collyweston’ stone slates using stone from a road aggregate quarry at nearby Duddington. This method was developed further and the material was tested by English Heritage at Apethorpe Hall.

The success of these trials gave added impetus to Smith’s, who knew that they still had good reserves of stone in their mine under the land they owned. They also recognised that the historic method of mining had been quite wasteful; such was the abundance of the stone that they could recycle some of historic waste from the mine. Reflecting upon this, they appointed mining engineers and developed a proposal whereby the large intact pillars and walls of stone which remained between the mine’s galleries could be extracted by building blockwork piers within the galleries themselves. Also, while traditionally the waste stone that had been difficult to spilt or of inconvenient shape and size had always been disposed of by being replaced in redundant galleries, it was found that a reasonably large proportion of this material could be recycled, and useful slates made from it with the more reliable artificial frost splitting process.

Whilst these developments were taking place, Donald Insall Associates was having discussions with King’s College in Cambridge, who were seeking to replace the rapidly failing Collyweston stone roof of Bodley’s Court. Insall were aware of the Messenger trials, but also of the shortage of materials produced by them at that time. We were also aware of Smith’s dilemma of having material below ground in relative abundance (Nigel Smith estimated a ten year supply), but a lack of planning permission and the means to extract it. The timing was serendipitous and we were able to help broker an arrangement between King’s College and Claude N. Smith Ltd that funded the machinery necessary to recommence production at the mine, as soon as planning permission was obtained, in exchange for the first production run of stone.

The result has been that Claude N. Smith Ltd has revived the mine, producing sufficient stone to enable the company under Insall’s direction to successfully recover the roofs of Bodley’s Court, the first new Collyweston roof of modern times, using stone that would otherwise have been left underground. A mine has effectively been reopened and recycled, and an industry reborn. Smith’s are now undertaking a second major re-roofing project in Cambridge at Clare College adjacent to King’s, and have re-roofed Westbury House on Long Island, New York, the only Collyweston roof in the United States. Happily, Messenger Construction are also producing Collyweston slate and have developed a virtual reality tour of Gadsby Field Mine, located under their new offices at the Collyweston Heritage Centre, indicating that the Collyweston industry is once again alive. 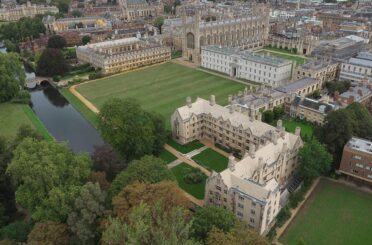 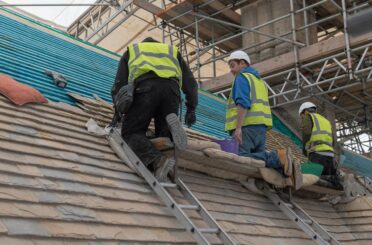