Home > The Relics of War and the Romance of Ruin 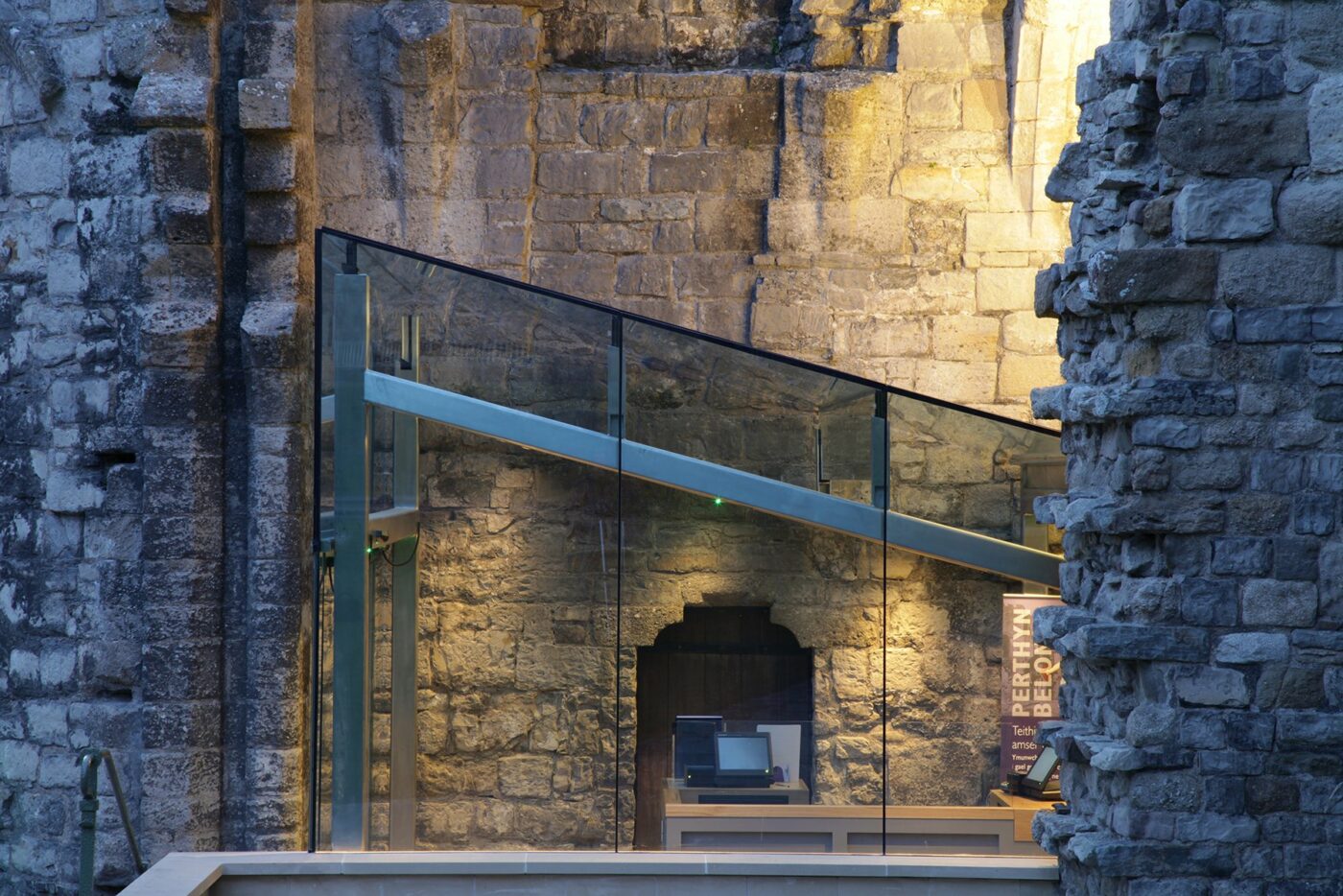 The social history of man is inextricably linked to the collective need for security. This has always found expression in architectural form, which most recognisably manifests itself as the castle. Thus it is not surprising that this basic, common, historic form found itself represented in the symbol of English Heritage and is often the object of Donald Insall Associates’ work. In fact the practice has worked on over thirty castles in recent years.

Castles fall into two main categories: real and romantic artifice, the second form often involving the re-use of the first and owing its realisation to the early 19th century medieval revival and the reinvention of romantic notions of chivalry.

Nevertheless many ‘real’ castles remain in ruined or partially ruined states and are carefully conserved. This requires constant review and maintenance; the practice acts as term contractors to English Heritage in a number of regions. Consequently over the past four years we have undertaken surveys of castles for English Heritage at Framlingham, Castle Rising, Brough, Brougham, Carlisle and Penrith.

More complex work in the past included the reconstruction and restoration of the Royal residence of Windsor Castle after the devastating fire of 1992, which included the re-creation of the elaborate architectural interiors. Also at Cardiff Castle, a landmark renowned for its opulent and gilded interiors by William Burges, we were appointed to implement its internal refurbishments and external masonry repair.

The Practice is currently working on a growing collection of castles in North Wales, and although these structures are architecturally extravagant, the once lavish interiors are long lost. Wales is a small country littered with the relics of war and the romance of the ruin.

Working with ruins is different. It allows us a freedom to focus on the archaeological narrative of the fabric and to distil our methodology for conservation. It also means that we can seek to be creative when we address Client needs for improving access and interpretation.

Of the same period, we are also securing the fragile stonework of the medieval towers and sandstone bailey walls from collapse at Ruthin Castle. The Practice is working to support a careful management plan for the structures. We are specifying repairs, and managing vegetation growth to arrest further decline of the ruinous fragments.

Totally different in character and of later antiquity is the early 19th century Picturesque Gwrych Castle in Abergele. This is one of the largest castellated mansions and curtain walls in Europe, and Hesketh’s original design intent for a romantic ‘ruinous’ landscape still stands to impress visitors today. We are continuing our involvement on site and having gained planning permission for a scheme to convert the main castle into a bespoke and unusual luxury hotel; we are currently supporting the outstanding efforts of the Gwrych Preservation Trust with their on-going proposals for the Melon House and Conservatory Tower. Working within the context of a ‘ruinous landscape’ here has allowed us to carefully interweave new interventions within this significant site, whilst also restoring the original castle interiors and staircase back to its original embroidered glory.

The biggest construction of fortifications in Wales took place during the reign of Edward I in the 13th century. These castles were not only built to deter an invader, but to control the frequent Welsh uprisings. Nowhere is this more prominent, and the existing structure still as intimidating, than at Caernarfon Castle. This is a World Heritage Site, completely dominated by the Castle, Town Walls, Towers, and Gateways.

Caernarfon Castle parallels the ambitions set at Blencowe, and has been a project that has involved intervention with new design but also involving highly complex consideration of existing fabric and proposed user requirements.

The Practice has recently completed the enhanced Entrance and Ticketing facility at Caernarfon Castle, which is visited by approximately 200,000 visitors annually. There was a need to make improvements to the existing visitor entrance to the castle to bring them up to a standard appropriate for a world class heritage site. Fundamental to our approach has been to define a succinct conservation narrative worthy of its highly sensitive setting. Accordingly, designs were developed which not only remained sensitive to the archaeological and historical significance of the Scheduled Monument, but which also seek to amplify the key interpretative elements of why this castle is so unique among its counterparts. The castle is furnished to repel attackers, while minimising exposure of the defenders (arrow loops, crenulations, machicolations, murder holes). Our new design includes a glass structure which emulates and emphasises the unique structural features of the Kingsgate Entrance within its construction. 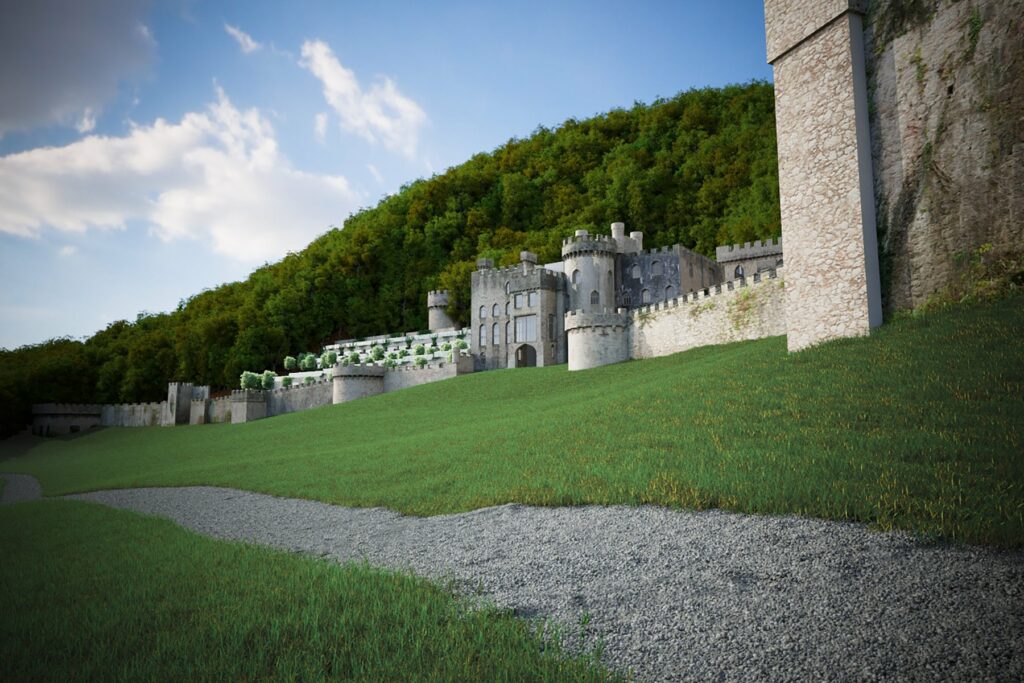 The design incorporates a unique glass and stainless steel structure, which demands a delicate and dynamic position within the gatehouse passage. The structure is completely freestanding so as to reduce the impact on the historic fabric and the form. Furthermore, the roof structure is completely transparent and fabricated out of glass, including the roof beams, to allow visibility for the visitor and to help encourage an understanding of the unique defensive features present in the Kingsgate. The structural frame itself has been detailed meticulously, with all services and rainwater features designed to minimise impact of new interventions within the sensitive setting. The success of the project rests with its ability to sit serenely and quietly. The glazed screen walls are held in place with a slender stainless steel frame and the positioning of the structural elements complements the positions of all unique architectural features within the castle. It is intended to draw attention to the otherwise lost historic backdrop of the ruinous fragments.

The next stage of design for the Visitor Centre at Caernarfon Castle is now in Brief development stage, involving full consultation with the various and wide-ranging Cadw stakeholder team and custodians.